Oh dear! How could I have forgotten?!? How terribly rude of me to not introduce you to my new boyfriend. Tisk, tisk, tisk.

Well, some things are worth waiting for so allow me to introduce you to my new main squeeze: the Garmin Forerunner 405.

You see, this relationship is new to me as my last boyfriend and I had to call it quits.

It started off with giddy squeals, long runs on the beach and we both enjoyed getting sweaty. He would beep sweet nothings at me and I would get lost looking into his eyes. We frolicked, traveled the world together, made memories of a lifetime and I knew that I could always count on him. 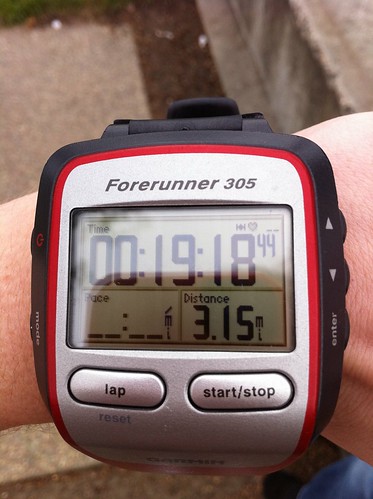 But as time went on, the honeymoon began to fade.

I would ask him to do something, something as innate to his being as a simple charge, but he would refuse to help and would sit on the couch pouting instead. I really don’t think I was asking that much.

He didn’t need to buy me fancy gifts or even send me flowers, I just wanted him to display my pace and time — that’s all. I didn’t even take advantage of any of his other features, including his rock hard core.

As our relationship began to crumble, I started wondering if I was to blame. So I coddled him, charged him and gave him all the juice he could ever need. But apparently the energy I was providing wasn’t enough.

Later in our relationship, I would take him to new cities like Boston and Big Sur, but he wasn’t appreciative of all that I was providing him. Here I was, planning and executing every part of our relationship and all he had to do was show up, and what did I get in return? Taunting jabs like “low battery.” When he foiled Boston by running away and refusing to join in the fun, I realized that enough was enough.

I no longer cared about all that we had been through together, it was time for bigger and better things – I put him on the shelf and couldn’t look back.

One day, a friend told me to head to the online dating site known as Amazon.com, where the Ryan Gosling of what I was looking for was the deal of the day. As soon as I checked him out, my heart was aflutter.

So this little Chicken I know had this special surprise shipped my way for my birthday and I couldn’t be happier. I’ll admit, the relationship is still new and we’re getting to know each other but if I tell you something will you promise not to tell him?

I think I’m in love.