In the midst of lamenting my physical woes, I failed to mention something any runner would deem exciting yet nerve racking at the same time: new shoes.

Way back in the day I was a Mizuno gal and upon moving to California I sought out new shoes  and found myself in Nike Vomeros. The Vomeros are a neutral shoe that are cushy beyond belief and welcomed my wide feet. I didn’t have many complaints, but perhaps naivety is bliss in this scenario. 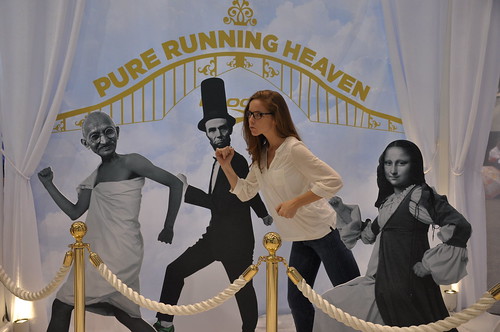 When I was working the Chicago Marathon expo and couple of weekends ago, I made my usual loop around the expo and stumbled upon a bit of expo marketing genius by Brooks. I will be the first to admit that their marketing lured me in and did everything it set out to do (kudos, Brooks). 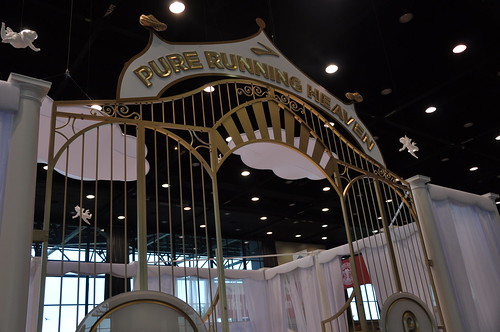 Unlike anything I’ve ever seen before, their expo space mimicked the pearly gates and welcomed runners into “Pure Running Heaven.” The space literally had fluffy white carpet, a harpist, their new Pure Project shoes atop of pillars and treadmill gait analysis by staffers in Greek-like garb. 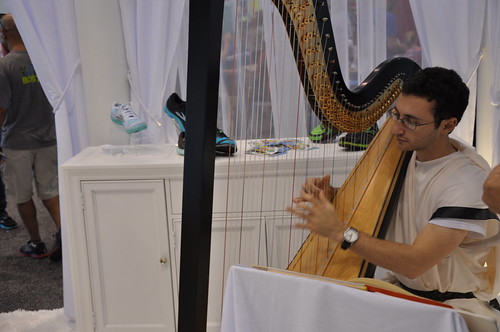 One of said staffers asked if I would like to get my gait analyzed for a chance to win a free pair of Brooks Pure Project shoes and get a free CD of running music. Being the curious expo-lover that I am, I signed myself up.

After a couple minutes running barefoot on the treadmill and a video replay of my stride, my horrible pronation was re-confirmed and they recommended a stability shoes. Wait, what? A stability shoe! I thought I was a neutral girl through and through – the folks at my local Fleet Feet even confirmed it. The Brooks staffers assured me that I would probably be a candidate for a stability shoe and I should check them out.

While I was hesitant of the sales ploy, I thought what the heck, I’ll move into their other, “regular” expo space and try on a pair. Usually, when I’m searching for new kicks, I’ll go through every pair on the wall and end up right back where I was: in the Vomeros. But this time it was different, I slipped on the recommended pair of Brooks Adrenalines and whoa…this time I literally entered the pearly gates.

My foot felt snug, yet wide enough for my foot. My heel didn’t wiggle and I could feel the structure of the shoe that I never had before.

I must admit, I was confused. Purchasing new shoes, a new brand and new structure altogether is a scary thing to a runner who is used to their gear. But when they told me about the expo discount, threw in a pair of free socks and once I tested them out a bit…I caved. I am now the owner of a pair of Brooks Adrenalines. 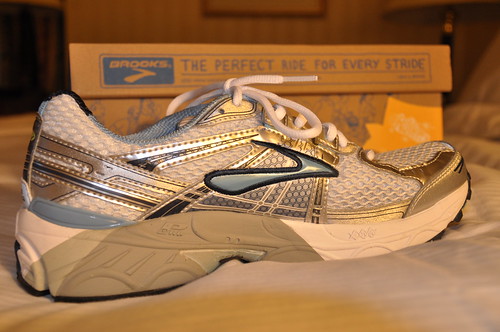 Before I left, I also asked them about the CD that I was given at the gait analysis to see if I had a winner. I gave it to the staffer, he looked and it, up at me again, then announced to the crowd, “WE HAVE A WINNER!” Hot damn – I had won a pair of their new Pure Project shoes! I won’t get them until December, but can’t wait to try these new babies out! 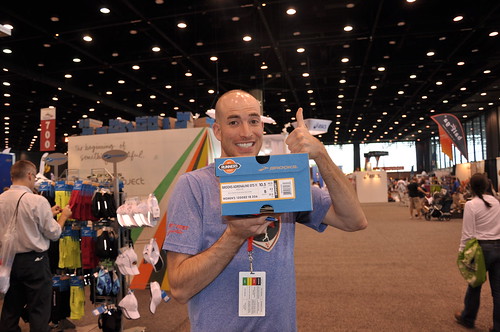 Thus far, I’m extremely happy with my Brooks Adrenaline kicks. I did contemplate if they could be contributors to my hip issues but the doc said no. I’m going to continue with these as my go-to shoes and will report back once I get the winning pair.

P.S. I was not compensated or contacted by Brooks at all for this post. Just a product review that I love and wanted to share with you  all.

Like Loading...
Adrenaline Brooks Expo Shoes
by PageWilliams
25 Comments
previous: A Hip Update and The Psoas Muscles
next: Celebrating The Small Things

Leave a Reply to Susan - Nurse on the Run Cancel reply