Panic Attack: “A panic attack is a sudden episode of intense fear that develops for no apparent reason and that triggers severe physical reactions. Panic attacks can be very frightening. When panic attacks occur, you might think you’re losing control, having a heart attack or even dying.”

I had to Google it to make sure I wasn’t over exaggerating, but when I put my head in the open water for the first time and all I saw was this, I freaked:

Absolutely nothing – just solid green all around me.

Allow me to backtrack… 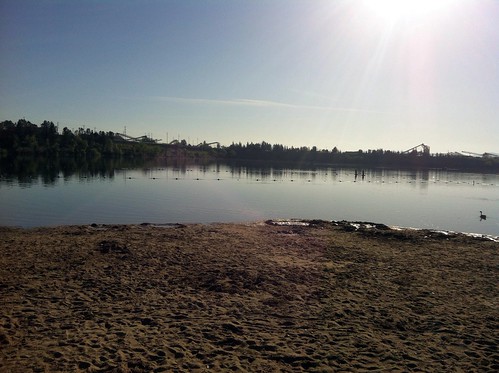 There is a reservoir that my coach’s group will now be swimming at weekly. In order to get permission to swim out of the reservoir’s swim lanes, you must be an Orcas member and pass a simple 200 yard swim test. It should have been easy enough.

Today, we had said swim test followed by my first open water swim workout. I had dreams of this going swimmingly (pun intended). For the swim test, you weren’t allowed to wear a wetsuit, so without thinking twice, I waded through the water and into the swim lane area. Giggling and nervous, I made small talk with neighbor swimmers until I finally had to start.

I put my head in the water and attempted to swim regularly, but that’s when it hit me.

I couldn’t see anything. My heart went bezerk. I couldn’t regain my normal breathing routine.

I swam a handful of strokes and couldn’t do it.

My heart was pumping and my thoughts weren’t helping anything.

And so I stopped and tried to compose myself again and somehow, I managed to fake my way through 200 meters at an atrocious pace.

I don’t think anyone noticed what happened out there because as I made my way back to the group, the Orcas leader gave me the official swim cap, the sign that I had “passed.” 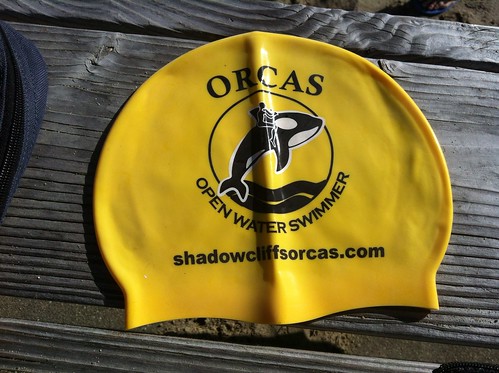 Post panic attack number one, I was determined to do the 1,600 yard swim outside of the swim lanes with the rest of the group, but this time, in my wetsuit.

With the confidence of the wetsuit’s buoyancy at my back, I made my way out to the “rock pile” (the opposite side of the reservoir that acts as the turnaround point). I was still a disaster on the out AND back. I’d take a couple of strokes at a time and have to stop and regain composure. The anxiety-driven thoughts were overwhelming me, my wetsuit felt like it was choking me, I freaked out from the alleged choking, and then I got some severe gut aches because I was gasping for so much air.

Somehow, I flailed my arms and legs enough to get me back to the beach feeling pathetic and defeated.

I minimized my post-swim conversation, made my way back to my car and called my mom. I’d never, ever felt anything like this before and even thinking about it now gets my heart racing.

I know the only thing I can do is keep at it and with time, I’ll get comfortable. I’m thankful for all the tweets and emails I got about others experiencing the same thing with their first open water swim; it’s good to know that I’m not the only crazy one. But I’m still extremely nervous about the next time I face the open water, which will be soon.

But there was something good that came out of this swim. As I was walking to the swim lanes, I saw something hidden in the dirt. It’s face looked familiar so I grabbed it with my feet, rejoiced in my treasure and shoved it in my top. 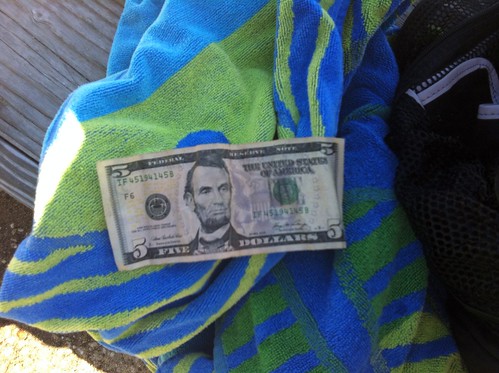 I guess it did pay off.