I had a date with the open water and I had guilted Chicken Face into accompanying me to the park with Lola. He begrudgingly gathered up Lola’s things and was probably cursing me under his breath. It was uncomfortably hot outside, he had just gotten home from work and I was pushing him out the door to do something that he clearly didn’t want to.

“It will only take (hopefully) 30 minutes and Lola could use a walk – hurry!”

I sped to the park, hopped out of the car, hustled to the meeting place and noticed that I was officially late to meet the group. Some were already in the water and on their way to a longer course. There was another smaller group that would be swimming the same short course that I was, but we were different paces so I couldn’t count on swimming with them. Great – I’d be practically by myself, an open water no-no. Well, at least Chicken Face would get suspicious if I didn’t show up 30 minutes later, or the other group would stumble upon my floating body.

I shimmied into my wetsuit and stuffed my hair into my cap, all while noticing that Chicken Face was still not having any fun. I quickly pointed out the trails where he could walk Lola, strapped on my Garmin and made my way to the water.

A few quick looks underwater and I was off.

1-2-3-breathe-1-2-3-breathe-1-2-3-I wonder what Chicken Face is doing-I can’t believe XYZ happened at work-What’s for dinner tonight-Don’t forget to point my hand down-sight-I still need to pack for tomorrow-Whoa-what the hell is happening?

For the first time ever, I had the type of “normal” thoughts that I have running while swimming in the open water. I wasn’t focusing on the water, the visibility, the distance, the creatures underneath – nope, just life, form, and other random nuances that pop into your head. Before I knew it, the swim was over and nothing dramatic had happened.

This was the first open water swim with absolutely zero anxiety.

While it was a short swim, it was still one of the biggest successes I’ve had in triathlon training thus far. I swam in the open water, unafraid, confident and actually enjoyed it. And to top it all off, when I saw my average pace I had to double check and make sure my watch wasn’t faulty: 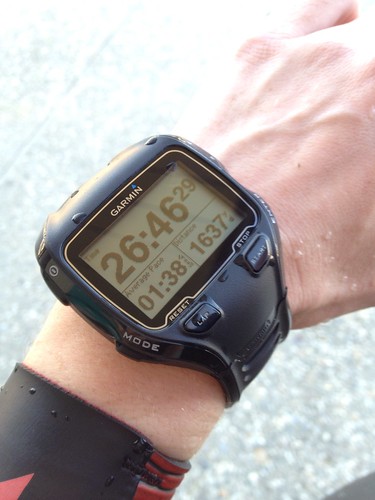 Thus, it’s easy to see why I was beaming ear to ear – I had conquered a fear that had been plaguing me for months and made me question my purpose in triathlons. It was a glorious moment.

While I am the furthest thing from an open water or swimming expert, and I’m sure I’ll still have my fair share of OW anxiety, I thought I’d share a few tips that have helped me thus far and maybe a few will help you as well:

I know that I’ll most likely have another anxiety attack. It’s natural. But for now, I’m going to think of what my mom told me when I cried at the lake, “There will come a time when you’ll back at this and laugh. You’ve got this.”