Saturday was the big one.

The training day that my mind decided would be the “make it or break it” workout.

As I put the final touches on my bike, I noticed a special addition to my aero bottle. It instantly made my heart smile. Thank you, Chicken Face. 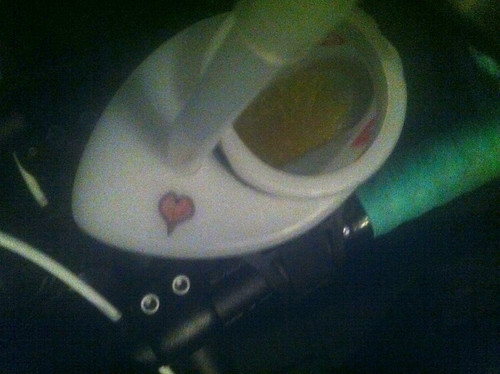 As soon as there was a safe amount of sunlight, we hit the road ready to conquer the day. It was cold, but I was happy just riding along talking with friends. But then it hit me and so did one of the worst noises you could hear.

I cursed like a sailor, pulled to the side and my sad fate was confirmed. FLATS! Really, world? REAAAALLLY?! I’ve never had a flat before, let alone two, and was not a happy camper. Thankfully Coach Paul was right behind me and he pulled over to help. 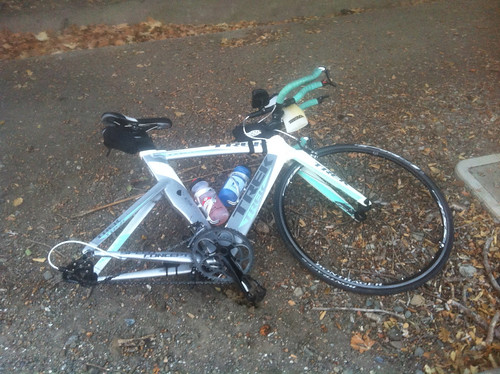 We were literally eight minutes into the ride, EIGHT MINUTES, and I had thrown a giant monkey wrench into the mix. Knowing that we had a long day ahead of us and my tire changing skills are…wait, I don’t even have any tire changing skills, so Paul put his skills to the test and began fixing my flats. 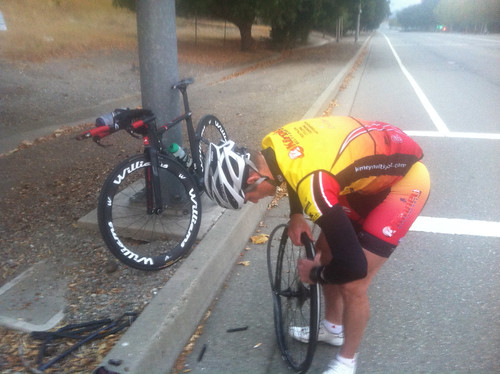 I had one spare tube with me so we used that to fix the back flat. Done. Despite it being for his race wheels, Paul had an extra tube and began to use it to fix my front tire but then he found something extra special. Not only had the son-of-a-bitch rock busted both of my tubes, but it literally ripped my front tire.

Paul, being the genius that he is, took out a Gu, emptied it, then lined the tire with the Gu wrapper. From there, he then replaced the tube. This little Macgyver trick would be enough to get me back to the parking lot where he would then hop in his truck, go home and get a spare tire, tube, C02 cartridge and everything we needed to get back on the road. 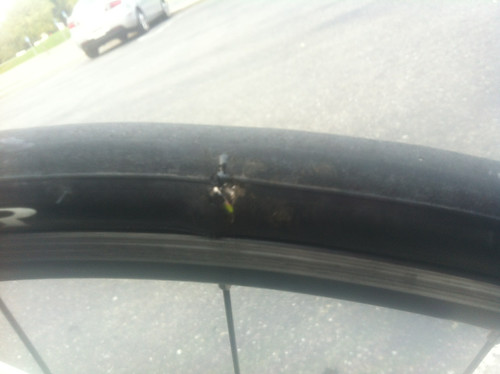 The results from a very vicious rock.

Let’s just say that my little rock issue set Paul and I an hour behind schedule. I am so thankful for Paul being there and all of his quick thinking – I owe him big time! But it also put me in a horrible mood for the entire first brick. I mentally complained about how I would have to complete this entire day by myself, a fun ride with friends was lost, and more importantly, I was fretting on how I was going to make it back by 4:45 in time for Chicken Face’s birthday party. I was throwing myself a miserable little pity party.

If I haven’t given Paul enough praise already, I owe him even more. Despite my sour mood, he was great and stayed with me for a solid portion of each ride making sure that I wasn’t alone and that I was safe. I was probably a gem to be with, but I can’t thank him enough.

As I was riding my first brick, I saw my friend Ilona on the side of the road. She had been the victim of a flat as well! What the?! I asked her if she needed anything and then assured her Paul was right behind me, because let’s be honest, I would be of no tire changing help anyways.

I got back from the first brick, made my way out on the first run and tried to get down to my Ironman pace, but just couldn’t get there. I need to learn to slow down! After I completed the first brick I was still grumbling about my first world problems. But as I was reloading my bike with more fuel for the second ride I found these: 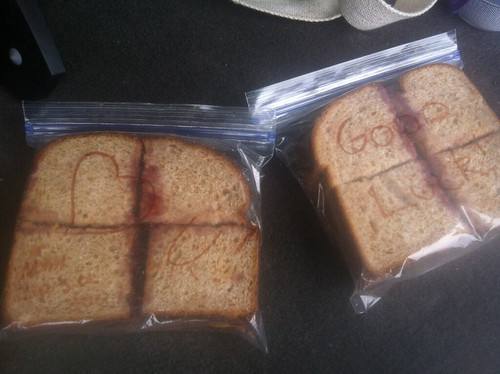 It was exactly what I needed – a reminder of what’s important and the amazing support I have. Thank you, Chicken Face!

I shoved down half of a sandwich (bad idea, by the way. Need to space those out more.) and it was almost as if I had become content with peanut butter, jelly and acceptance. I finally accepted what had happened and would make it work. I was going to be by myself, but that’s alright because it’s great mental training for race day. Like my dad says time and time again…

Shit happens. It always has and always will. But it’s not what happens, but how you handle it.

The rest of the day went pretty much as planned: ride, run, eat, drink, repeat. But there was something strange in the air…

On my final ride, I saw Paul and Jared on the side of the road – Jared had fallen victim as well. Two flat tires! WHAT WAS HAPPENING TODAY? Add Ed’s flat and it made for a total of six flats from one group in one day! WITCHCRAFT I TELL YOU! But seriously, my theory is that there was so much debris in the road from the season’s changing, or maybe it’s all of the bad vibes getting out of the way now instead of race day. Either way I know one thing for sure: I need to practice changing tires.

When I was approaching the final run, I knew I had to cut it short to try and retain my marriage — it was his birthday afterall! I shortened the run to 20 minutes and increased my pace. When I was done I briefly stretched and had to hustle back home as all of the guest were already at our house!

Yes, I was late and everybody was already there, but they were patient enough to wait for me before we, wait for it, went on the beer crawl. A triple brick followed by a beer crawl birthday party. Genius refueling, I know. As we made our way from shop to shop filling our glasses, my legs were tired, but I felt an amazing sense of accomplishment. I completed the dreaded triple brick with some very unfriendly circumstance and still made it back to celebrate. It was an amazing confidence booster and I’m getting more ready than ever for the big day.

It’s almost time, I’m getting excited and I’m pretty sure I have the best little family ever. 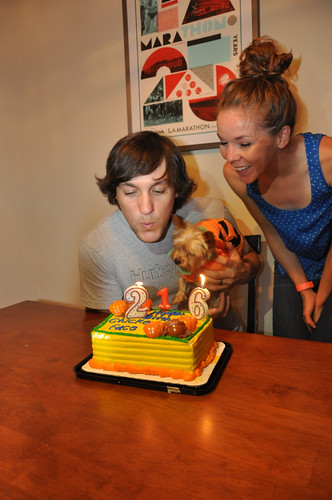 (No, the candles aren’t representative of his age. They were the only candles I had.)