First and foremost…THANK YOU. I knew that our little online running and triathlon community was great, but I don’t think I realized how amazing it was until this week.

Thank you so incredibly much for every single one of your comments, emails, texts, tweets and phone calls. In the midst of all the injury and rescheduling chaos, your incredibly kind and supportive words would bring a smile to face and mean so incredibly much to me. From those who are regular readers and commenters, to those that are commenting for the first time, all I can say is thank you so, so, much.

Now, for an update. 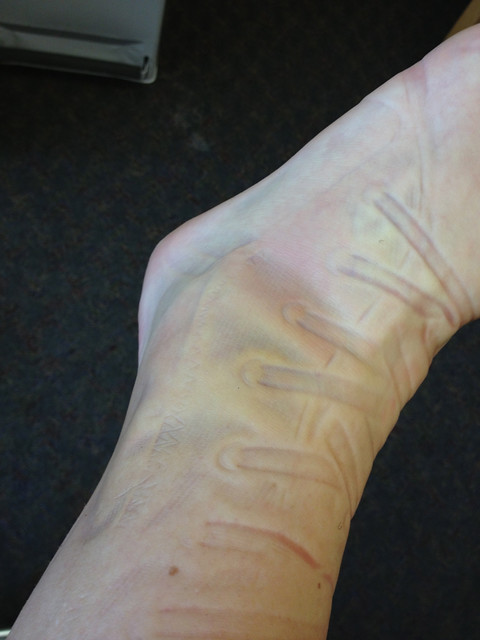 When I wrote the last blog entry, I had just come back from the chiro where I was given the bad news. I wasn’t sure what else to do so I sobbed and blogged. After said blog was published, I wrote another email to my chiro with the subject line, “Are you sure?!” This wasn’t really happening, was it?

Chicken Face was away on business and there was no one around to really calm me down. Thus, refusing to believe anything, I Googled for an urgent care that was open late, had x-rays on site and took my insurance. With luck, I found one that was less than 10 minutes away from my house and called to let them know I was coming – they were about to close in an hour and I needed to know if something was fractured.

I raced to urgent care where the entire staff was just sitting there waiting for me. I walked in and they asked, “Are you Page?”

I answered yes and suddenly four people sprung into action.

One woman brought out a wheelchair and I said, “No, no, I don’t need that.”

She insisted, so I sat.

One woman was collecting my insurance and personal information while another guy was asking about what happened. It was a crazy harmony of multiple people doing their jobs simultaneously. They must not have had any other patients or serious cases to attend to.

I was taken to the back to get x-rays and the doctor came back saying that yes it was a sprain, no breaks or fractures, but given the severity of the sprain, she didn’t think I could do the race. However, she recommended that I see a sports doc to know for sure. She then went on to say that she knows how I feel because her son plays football and he got a sprained ankle and he had to sit out for two games. It took everything in me to not, ehem, politely clarify the differences in the two situations.

I came home from urgent care feeling slightly relieved. I ate dinner that consisted of a giant cookie and then went to bed. Sometimes eating your feelings does feel good.

The night, I had a dream that my mom ran the race for me instead. I remember thinking, “But she didn’t train!” but I saw her run past me smiling. I then woke up literally thinking it was all a horrible nightmare, but alas, it wasn’t, and my head was throbbing.

Later that morning, I was able to get into a sports ortho doc. He was an older gentleman who probably touched my feet for a total of five minutes, examined the x-rays and then diagnosed me with a high ankle sprain. When I asked what the difference was he said, “Well, they take longer to heal than regular ankle sprains.”

Then the weird part: he pulled up Google and searched for “high ankle sprain.” Um, what? No sir, I’m not paying you to Google for me. He used it more to illustrate what part of my body was affected, but something about it just didn’t seem right.

He looked at me and simply replied with, “You know the answer.”

And then I cried. It was official that Ironman Arizona was out.

I called Chicken Face, my family and my coach to tell them the official, official, news. While I suppose I still could have gone to Arizona to watch the race or just have a vacation, I was too emotionally messed up and didn’t think I would be able to handle seeing everyone else race so we cancelled the whole trip.

I headed back to work and tried to carry on as normal as possible, but then Google sucked me in and scared the shit out of me. Don’t ever Google “high ankle sprain” because you will find things like this:

Just the term “high ankle sprain” is enough to grab the attention of, if not frighten, the toughest athletes. Even if you’re not exactly sure what’s involved, you probably know that it’s an injury that could keep you out of action for months. And you’re right. High ankle sprains are much less common than the garden variety low ankle sprain, which can be serious enough, but they’re hard to treat and can cause long-term problems.

An athlete may be out for as little as two to three days or as long as six months.

I was sending all of these articles to Chicken Face, in which he would reply, “Stop Googling.”

Once I pulled myself away from the mistake that is Googling your symptoms, my friend Carrie (who is a PT and has completed 15 Ironmans) invited me over to her house to take a look at my ankle. Can you tell yet that I’m having acceptance problems?!

Carrie was fantastic and spent an hour with me, asking questions, testing, watching me walking, massage my ankle and even making a custom wrap for me. She gave me hope in that it wasn’t as bad as it could have been (phew!) and with time, I’m going to be A-OK.

I didn’t waste any time setting up my physical therapy appointments and I was lucky enough to get in the next morning. I met my PT, Emily, and I couldn’t have been happier. She spent an hour with me, evaluating, learning my story, ultrasounding, stretching and more.  Her perspective was similar to Carrie’s in that if this only would have happened four weeks earlier, I could have taped it up and been good to go come race day. But unfortunately, it happened when it did and I was screwed. 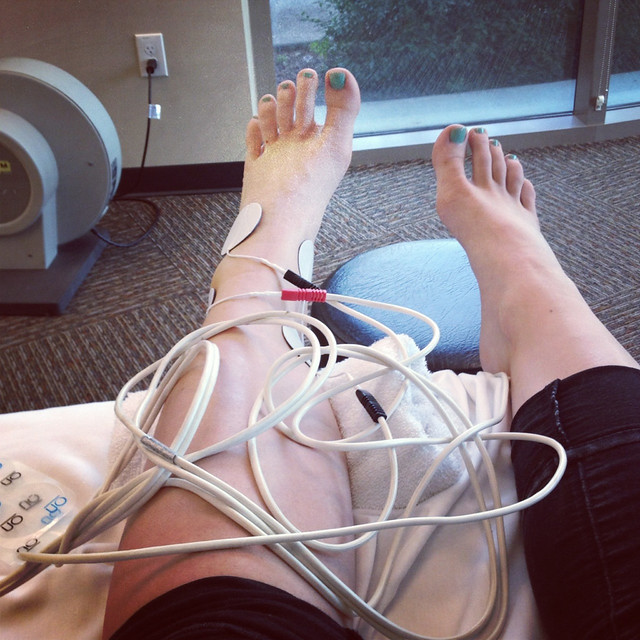 Per Emily, I need to wear compression socks under my brace as we’re really going to focus on getting rid of all my swelling first and stretching the ankle, then strengthening. I asked her what exercises I can do and for now, I’m limited to upper body, core, swimming (no kicking) and cycling (only if I wear my brace, no resistance and no climbing). Thus, I can’t wait to get Dora back.

I left PT feeling good and anxious to get on the rehab bandwagon. I wasn’t wasting any time and was going to move forward no matter what.

The good news is that I think I have literally run out of tears and the only thing I can do now is move forward. If I keep dwelling on WHY? WHY? WHY?!, it won’t do me any good. I was shattered, but I’m not wasting any time picking up the pieces and I’m NOT letting this deter me from becoming an Ironman. This has been a lifetime goal of mine for a long time and I’m not going to let a stupid sprained ankle stop me.

I still have what I call “relapses,” where I’m alone with my thoughts for whatever reason and I start to cry. I know Sunday will be a bit tough as I see all of the photos and results pour in, but beyond that, I have to believe that this all happened for a reason. Plus, I know that far more serious things could have happened and I’m very lucky that it’s only a sprain because I can heal and compete again. I know that when I come back for the next one, I’ll just be that much stronger – like I said before, TITANIUM! As I am picking up the pieces, I’m trying to plan what race I should do, how it cannot cost a gazillion dollars and how to make my family happy. I’ll follow up with my thoughts on that soon, but for now I’ll ask:

DOES ANYONE KNOW HOW TO GET INTO SOLD OUT IRONMAN LAKE TAHOE?

I would love you forever!

Now, more than ever before, I have to remember my dad’s favorite motto: It’s not what happens to you, it’s how you handle it. I’m now choosing to handle it by not moving on, but moving forward.

Thank you over and over again for all of your support.