After I got injured, I knew I was going to train again and achieve my Ironman dream. However, signing up for another Ironman, let alone one that was sold out and I had to buy a foundation spot for, meant that I had to watch my budget closely and I wouldn’t be able to sign up for multiple races leading up to IMCDA. Thus, I knew I wanted to do at least one triathlon before my A race, but it had to be cheap and close.

I registered, I told my family about it, I told my coach about it so he could work it into my schedule, and that was about all the thought that went into it. Even during the week leading up to the race, I was simply considering it as a good Saturday brick workout, i.e. I didn’t look at the course, the details, nada.

Friday night I packed my stuff, we woke up and Chicken Face drove the two hours to Folsom, where some of my favorite people in the world would be as well: 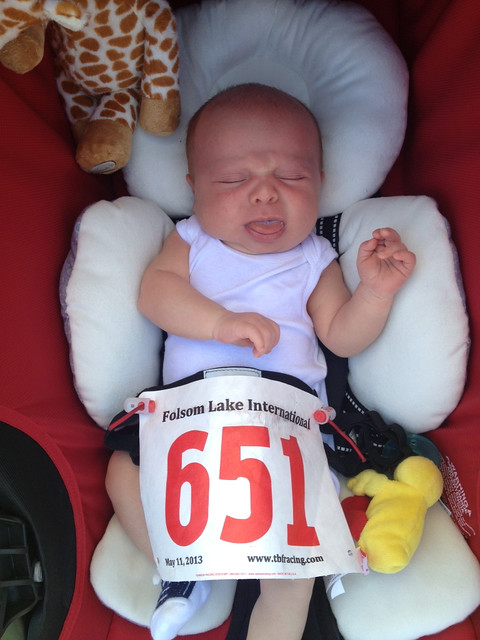 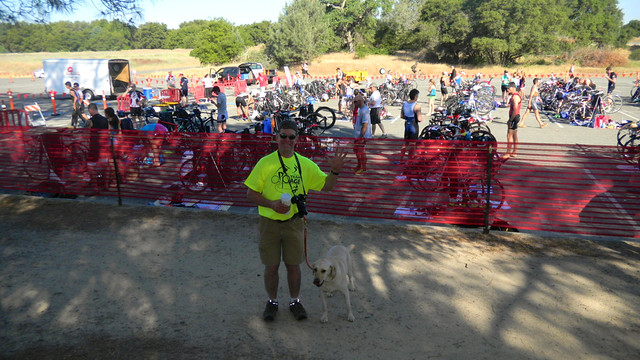 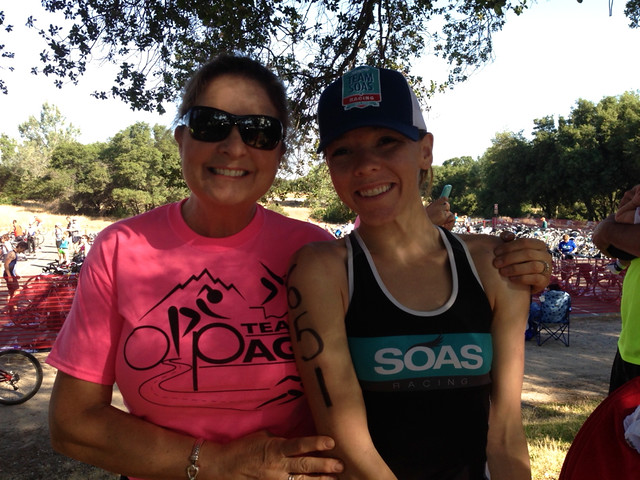 I didn’t expect my mom, dad, sister, brother-in-law and my nephew all to come! Definitely the best part of the day <3

So where were we, oh ya, this whole triathlon thing. My goal was to get re-acquainted to the race day atmosphere, open water swimming, transition practice, and try and push it if I could. But given that I had run my first 20 mile long run two days prior, by legs were heavy and tired; I was anxious to see what would happen. 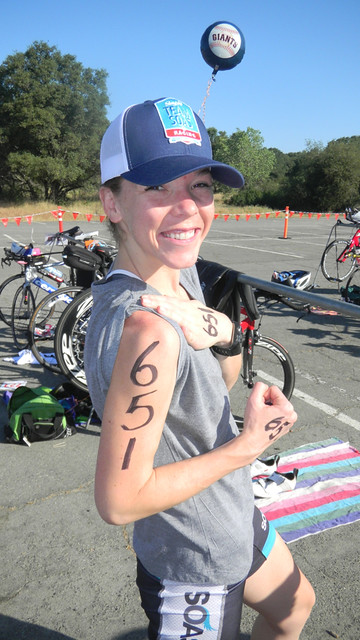 The start was pretty seamless as it was a small race. Race-day check-in, no line at the port-a-potties, body marking, and transition set-up —  easy shmeezy. I also wore my SOAS race kit that I bought last year and raced in it for the first time. It was AMAZING. Zero complaints here (I’ll do a full review on the kit soon!). 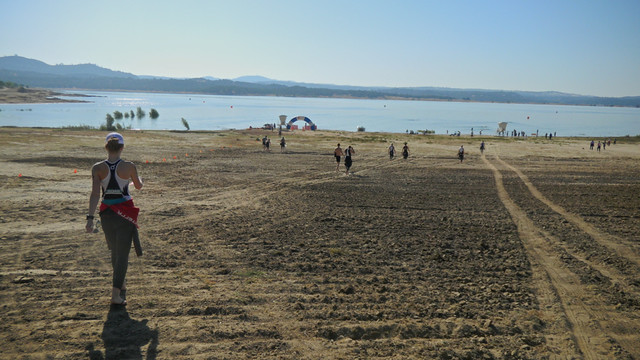 But then I looked out and realized that the swim start was waaaaaay out there. Apparently, the water levels were down this year and the swim start was a solid 800 meters (or it least it felt like it) down uneven dirt and rocks. What does this mean? That post-swim we would have to run up it to the bikes for T1…and there was no man-made path. I know, first world problem, but definitely not ideal. 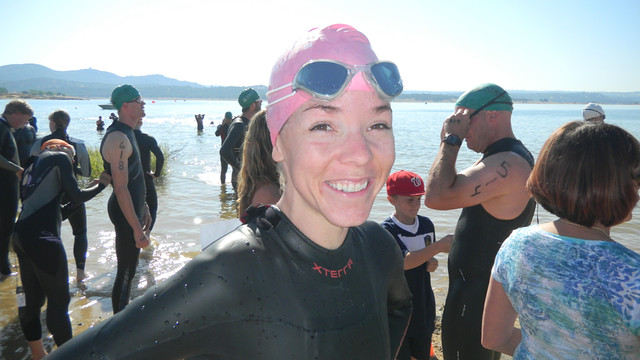 We made our way down to the start where I got in the water, did my drills and got a mini swim warm-up in. You couldn’t see crap in the water, but I’m used to it now, and the temps were perfect. It was exactly what the doctor order.

Soon it was time for the wave beach start. My age group was fairly small, so we all chatted and then ran when the gun went off. The water was so shallow that I ended up running further than most as I’m sure my slow swim wouldn’t have been any faster than me trying to run through the water.

I dove in and just began to sight and swim. NO ANXIETY. I somehow found myself swimming solo. The fast people were far ahead of me and I was just ahead of the back pack. No one to draft off of, just me making my way around the buoys. 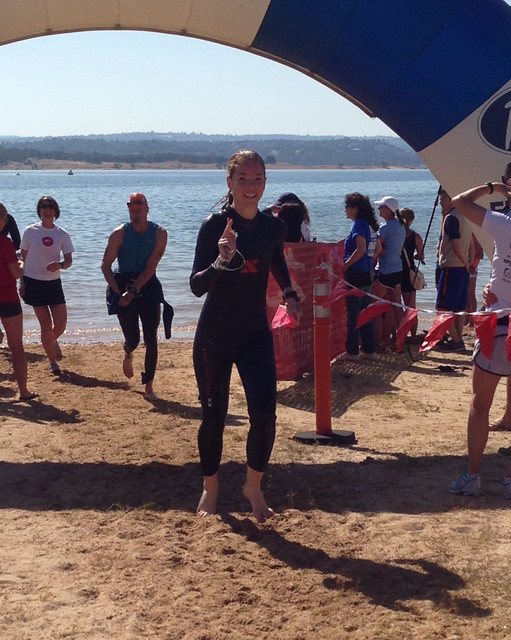 I simply found my swim zone and counted down the buoys as a way to break the swim up. Next thing you know, I’m at the finish, ripping off my cap, running up the dirt path and making deals with the devil as I beg to not roll my ankle on the rocks.

Transition was quick, well, except for the fact that I put on socks (hello, blister!) and I don’t have Yankz on my shoes. The bike wasn’t difficult per se, but rather it felt like roller after roller after roller…with a big roller/baby climb near the end. It was enough to keep you on your gears and feeling the difference — my legs definitely were. No spring chickens here. 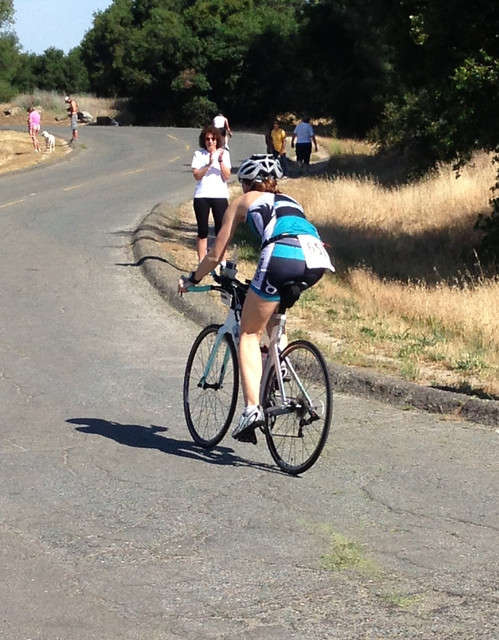 The only part I can really complain about was as we neared the finish of the bike, there was a volunteer telling us to slow down and be careful as there was a 75 ft. gravel path we had to ride on to get to the road. WTF?! I felt like I was taking my tri bike mountain biking — NOT COOL! Please find a different route as this made me come to almost a complete stop for 75 feet, not only loosing all speed but any momentum.

People were dropping like flies and were either verbally huffing, puffing and cursing, or just plain walking. I did not expect this AT ALL. But perhaps I have myself to blame as I didn’t do my homework. Regardless, this course was tough, but it’s intensity was multiplied by the relentless heat. My legs were heavy and I decided that my goal would be to just stay steady. Don’t over exert as it would just burn me out.

I kept it slow, I kept it focused, I dumped water on myself at almost every aid station, and I even had to walk twice up to steep climbs and down a few so that I wouldn’t fall or hurt my ankle (I really wish they told us to bring trail shoes).

The great thing about this course is that all of the athletes were in it together, telling each other “good work,” or venting together about the heat. Occasionally there would be a view that was so gorgeous it would distract you for all of eight seconds, but then it was back to the trails and the heat.

I saw my sister, nephew and brother-in-law on the final stretch in, and she shouted, “You’re third!” I coud see Chicken Face and my parents at the finish and was so happy to be done. I was not expecting such a challenging course today. 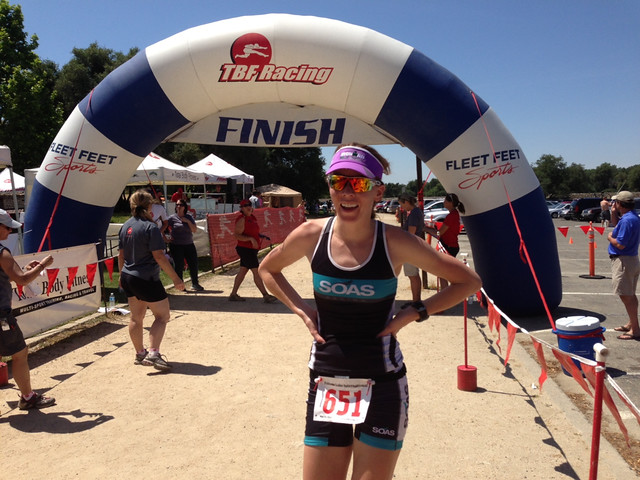 My body was feeling the result of the training and such a challenging triathlon, but the good news about small races is this: 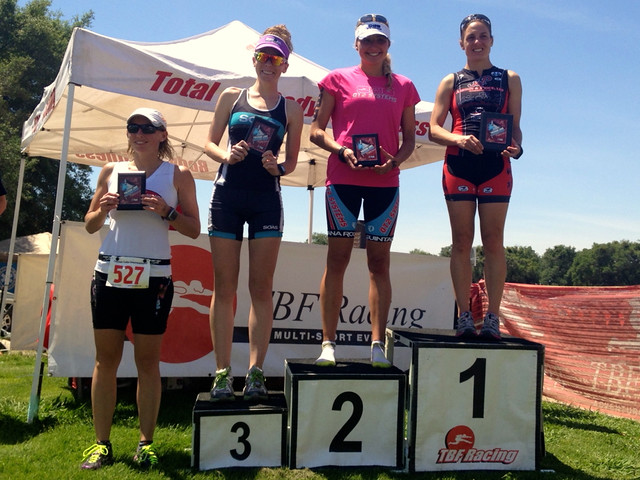 Yaaaaaaay third in my age group. The woman who got first in my age group also got first overall and set a new course record (2:18:15 — damn!). I even hear one of the top female finishers say that this race was, “Like a mini Wildflower, but on actual trails.” 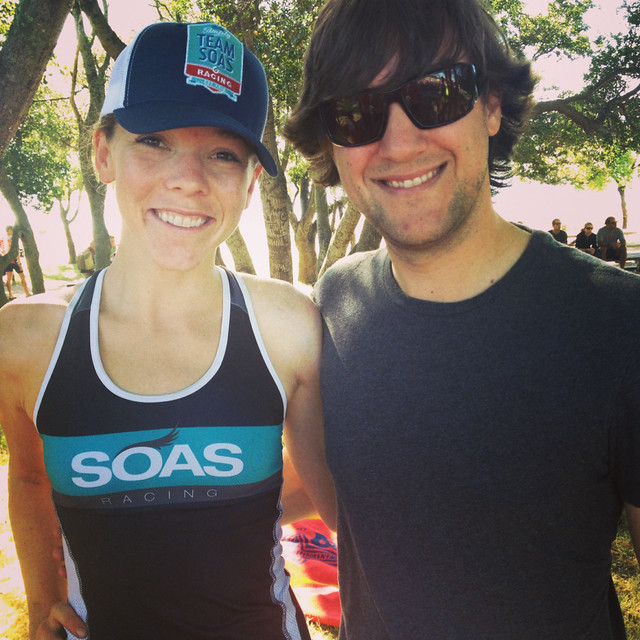 What I am excited about is to see the volume that my body can now handle. Never before would I have been able to run 20 miles, have a crazy intense Friday, then an international triathlon, followed by 3,000 OW yards and a 100 mile bike ride on Sunday. During Ironman training, endurance is the name of the game and I’m so grateful that my body if letting me do this.

Now on to the next week of peak training.