And so the story continues. I was out of T1 feeling pure happiness. 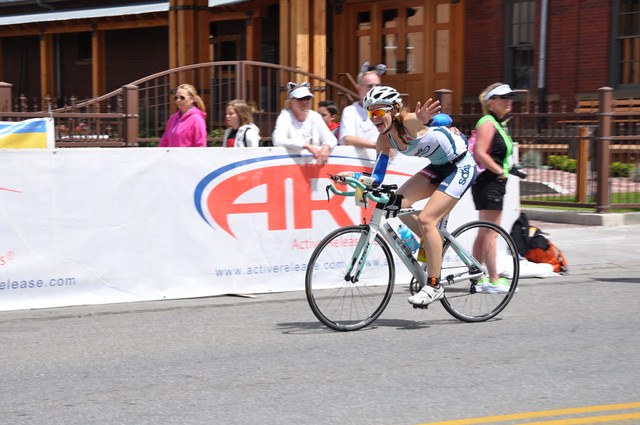 As I made my way out of T1 and onto the ride, I saw my dad who shouted, “NUNI. (family nickname) YOU ARE A WARRIOR.” My heart almost burst into a million little pieces. My grin was wide and I was shouting back – it was time to ride!

You exit the transition and ride through downtown for a bit where the majority of the crowd support is. This portion pretty much consists of your brain being lost in some sort of cycling and endorphin euphoria. But soon you are out of downtown and on to the meat of the course. 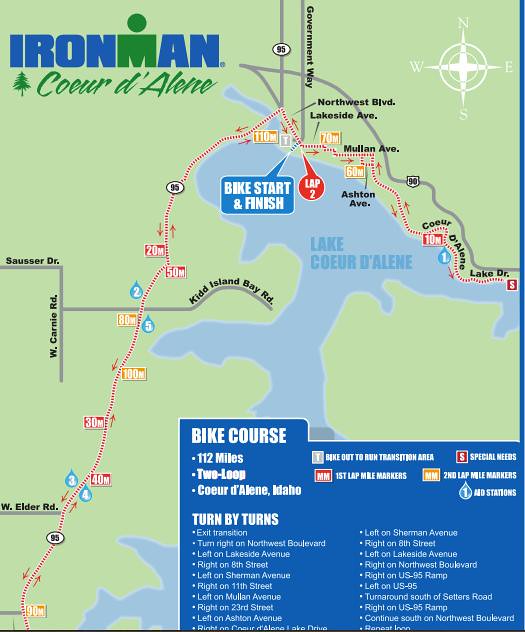 As I was on to the first out and back to the east, my body felt fine and my nutrition was right on track. Drinking, chewing, and getting into the zone. When you know that your going to be out there for six plus hours, it’s important that you just settle in…and that’s exactly what I did.

As I pedaled, I had to consistently keep my eye on the prize and hold myself back from being the hare. Usually, when other women in my age group would pass me or I would see another woman ahead of me, I’ll push it to pass them. However, the Ironman is a completely different beast. It took everything in me to not pick up my cadence and stick with women as they would pass me. Instead, I just told myself, “I’ll be seeing you on the run.” I knew I had a long day ahead of me and I needed to ride strategically and save my legs for this little thing called a marathon that would be coming up soon.

Around an hour into the ride, I started not feeling well. But this wasn’t the usual endurance event pain, instead it was the onset of that time of the month cramps and headaches. Perhaps this is TMI, but it’s what I dealt with for two hours. Bad cramping and my head was throbbing. Couple this with my missing salt/electrolyte pills, and I wasn’t feeling too hot.

One note of annoyance: as I was riding I kept hearing this squeaking noise. I was completely confused as I thought it was my bike, yet it sounded so far away. Was it my bike? Was it a bird? What the hell was that noise? I even pulled off to the side to make sure it wasn’t me. Then I figured it out. One girl’s very fancy Cervelo bike squeaked every time we were climbing — which was ALL THE TIME. I wanted to tell her to stop and fix her bike, but I kept my mouth shut and tried to drain out the constant squeaking. 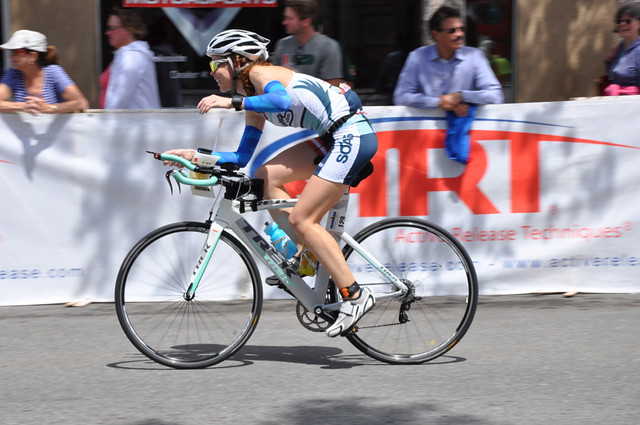 Soon the first loop was done and we made our way back downtown. I was looking for my family in the crowd and when I spotted my mom, she was playing with her camera. I began shouting, “MOM! MOM! MARTHA! MARTHA!” She finally saw me and we all screamed, waved and did the usual race cheering. Seeing my family was the boost that I needed to charge into the second loop.

Once you were out of downtown, crowd support was sporadic. So to stay entertained, I would try to say a few things as I rode next to people. Sometimes it was, “Cute kit!” or “Nice bike!” or even “Are we stiiiiill climbing?” I even got a few old guys grumbling about how I would pass them on the climb, but they would zoom by me on the downhill and I was reminded by them that this was a “lesson in gravity.” I must admit, the guy I saw asleep on the ground as his family cheered was pretty entertaining though too.

Outside of the chit chat, I stayed focused on hydrating and fueling as I had planned. I stopped at my special needs bag (another big shout of to the amazing volunteers there) for my extra stash of salt/electrolyte pills, Ibuprofen and Pringles. By the time five hours rolled around, the thought of one more peanut butter and jelly anything sounded revolting and the Bonk Breaker Bars tasted like dirt; thus, I changed to whatever I could get at the aid stations. As we neared five and a half hours, I increased my calorie intake to 300-350 calories per hour to ensure that I got in a bit extra in preparation for the run.

As I was nearing the end, I couldn’t believe that I had already ridden for six hours. I was a bit disappointed that I didn’t get my goal time, but the 6+ hours of riding actually went by fairly fast.  I even saw/met Abby on the ride! Plus, I didn’t get a flat (which I was fearing the entire time), no accidents, perfect weather, gorgeous scenery – overall it was a great afternoon on my bicycle. 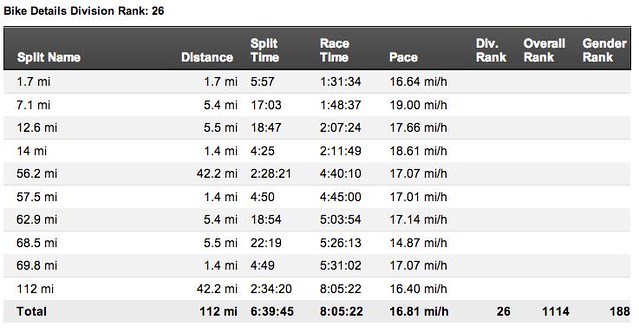 As I entered T2, I smiled and once again, my energy went through the roof. The fantastic volunteers (yes, they always need to have an adjective before the word “volunteer”) grabbed my bike and would take care of racking it. What?! I didn’t even need to rack my own bike? I asked, “What do I do with my helmet and shoes?” They instructed me to take them with me and off to the T2 bag pick-up and changing tent I went. 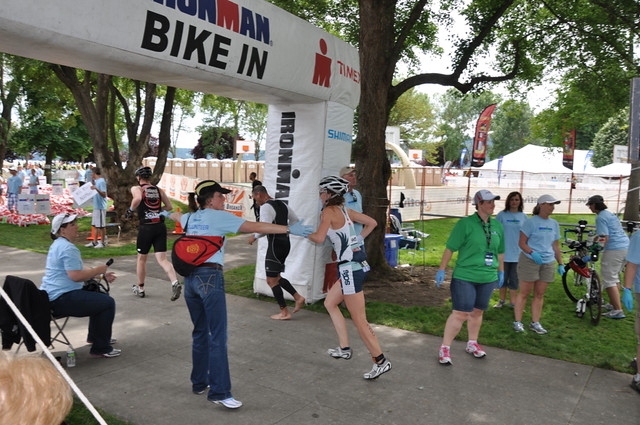 As I was running into the tent, I heard another volunteer say, “She better save some of that energy for the run!” I turned around, smiled, and couldn’t help it. I was 2/3 done!

Another lovely volunteer dumped my bag, helped me with my shoes, visor, pills, and I made my way to the run start. As I was fiddling with my pills, I looked up and saw Chicken Face. I was so incredibly excited to see him, ran over and gave him a sweaty kiss. Once again, nothing but pure love and happiness overwhelmed me. 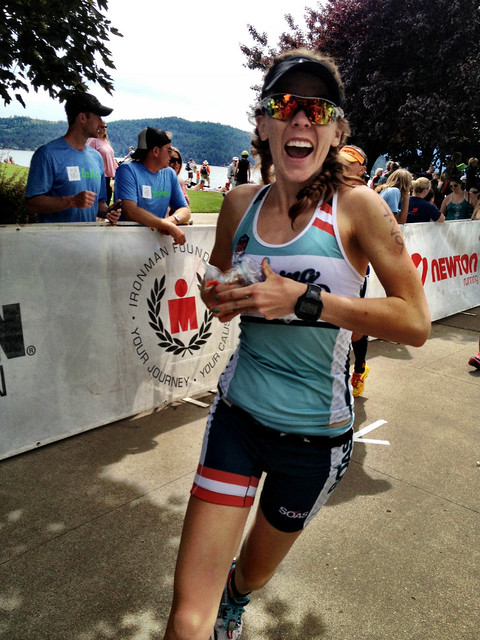