My first trail race experience was nothing but waterfalls and oozing mush for all things trail running. No exaggeration.

But I suppose it was only a matter of time before the trails put me in my place and said, “Hey listen up you road-running noob, we still have some serious initiation to do.” And like that, I was tested.

My travel schedule to Portland and the Bay Area has been a bit chaotic lately for both personal and work reasons. I was in San Francisco all this week for work and managed to tack on some personal time with the husband this weekend. When Jojo mentioned the Mt. Tam 50Ka> that she was running and that there were shorter race options, Chicken Face and I decided to stay true to our resolution and say yes to another new adventure. 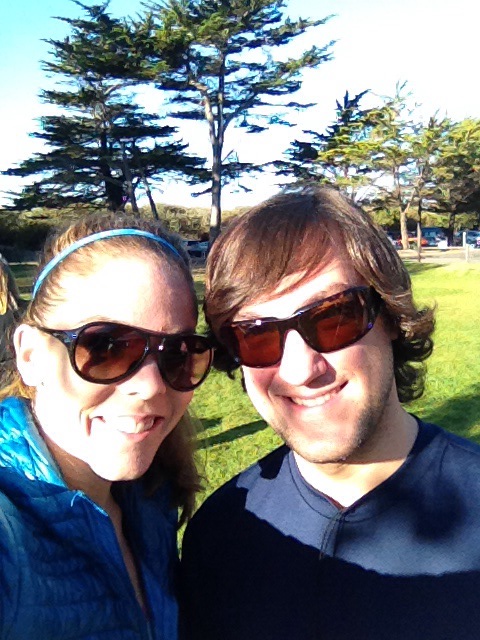 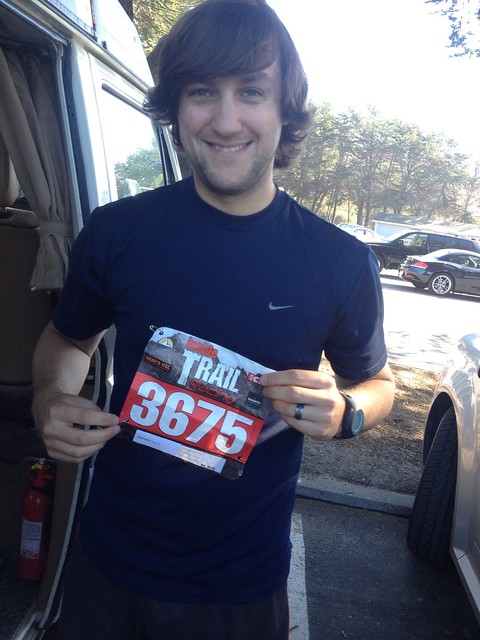 Despite his cold and my throbbing leg (don’t ask), we hopped in the Westy and made our way to Stintson beach for the race start. He would be tackling the 10K and his first-ever trail race and I decided to do the half-marathon (my training plan called for 14-18, but McMillan said I could go for it). 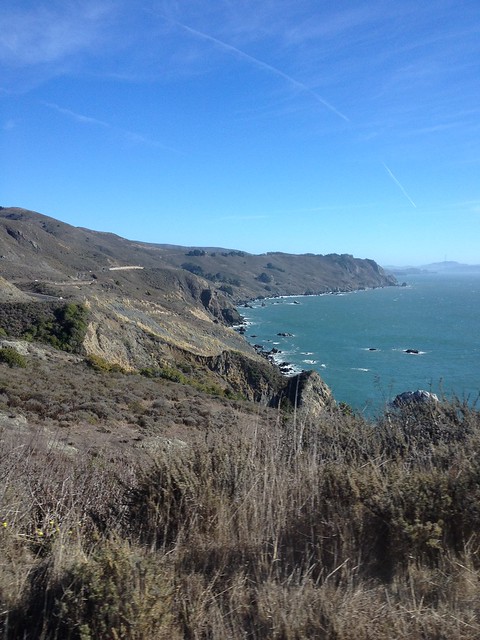 As a trail running newbie, I can look at this elevation profile and confidently say that this is more hill climbing than my pavement-loving legs have ever handled while proceeding at a pace that is faster than a walk.

Did I know if this is considered a “tough” course? A “shit-ton” of climbing? Or was this pretty standard in the books of seasoned trail runners? I have no idea and I don’t really care. To me, it’s a lot. Regardless, I knew that this was just going to be a beautiful training run. I said goodbye to Chicken Face, wished him luck on his own adventure, and made my way with the pack.

The course was gorgeous, in fact, it felt like a little piece of Oregon tucked right within California, but with stunning views of the ocean mixed in. But this race recap isn’t about the views, but about the challenge.

The course itself was just as expected, you were either going up, up, up, or straight down. Hell, you even climbed a ladder at one point. A LADDER! My heart rate was in for a shock and I realized that the trail race I did a couple of weeks ago was a cake walk compared to this. I happily waited to the right for other to pass me.

Not only was the elevation challenging, but the funny thing is, you actually have to pay attention while trail running. The horror! I’m used to mindlessly following huge signs and cheering crowds, not being on the lookout for yellow ribbons, then orange ribbons, then yellow ribbons again, avoid the blue ribbons, don’t follow the pink ribbons, and if you get lost, you’re on your own.

Well shit. This whole “paying attention to directions thing” should have been my first warning because if you’ve ever met me, you know that directions and I don’t play well together.

So there I was, climbing, climbing, climbing, wondering when this climb would be over. All I saw were pink ribbons and after what felt like forever, I finally realized something wasn’t right. I managed to ask someone if they had seen any orange ribbons, when they quickly told me, “Oh honey, you missed that a while ago. The turn was back down and a ways back from the climb.” Lovely.

I grumbled profanities and made my way back down the hill only to find a fellow half-marathoner who had a similar fate. We both managed to miss the 8.5″x11″ sign with the orange arrow. Soon, I had made a new friend and we were both laughing about how idiotic we were for missing the turn, while making loops in and around the Muir Woods trying to figure out where the hell to go. I pulled out my phone to see if a map would help (it didn’t), so instead I snapped this: OH MY GOD WE’RE COMPLETELY LOST selfie: 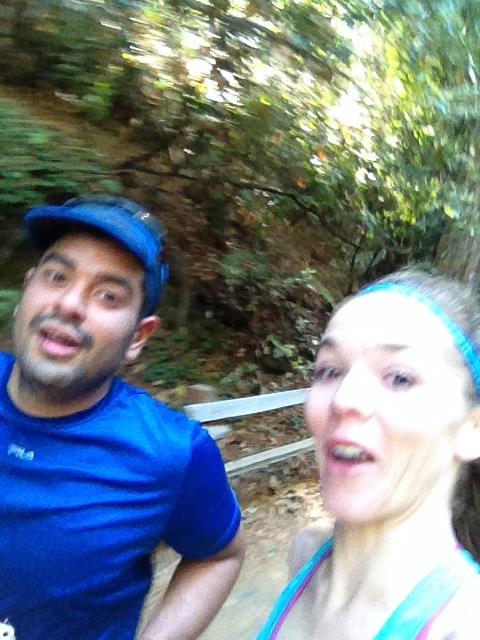 Luis soon spotted some park rangers who said, “We thought you were lost. Orange is at the end of the road that way…” The opposite direction in which we were running.

We continued to chuckle and when we finally found our orange arrow destiny, we rejoiced and figured that we probably added on around two additional miles. No longer were we in the half marathon game, but the “let’s just finish” game.

I soon parted ways with Luis with a new goal of just to get to an aid station. I didn’t have anything with me as I thought it was just a half and there would be plenty of aid stations along the way. I was wrong. There was only one aid station that you would visit once at mile 3 and mile 10 (which would be my mile 12+ by the time I reached it again). Trail running isn’t like normal road running where I can run 13 miles with minimal water or fuel, I needed something to drink and eat stat.

I could feel my legs getting wobbly and tired, and I rolled my bad ankle twice. Thankfully, it survived and I was a bit of a grumpy mess just wanting to get food and get done. Chicken Face would be waiting for me at the end and he would surely be wondering what happened.

I just ran and tried to take in the scenery because it truly was gorgeous, but the hanger was consuming me. When I finally reached the aid station I grabbed some fluids and bits of a PB&J. It didn’t take much, but it was just enough to give my the energy I had been longing for. 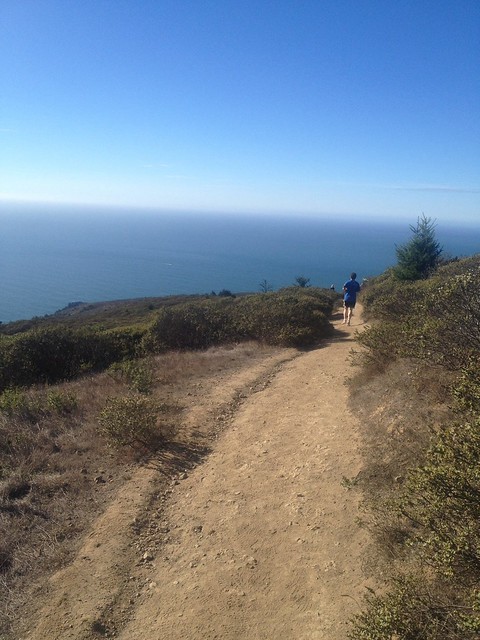 I made my way to the finish, just trucking along, going back down all of the stairs we had climbed up, making friends with the other women around me. As I was approaching the final miles, I caught my foot on a rock in the middle of the trail and completely ate it, sliding down my left side. Thankfully, I was able to pick myself back up and the girl behind me joked and said, “It will be our secret.”

I later realized that the fall took a bit of my dignity as well as my favorite sunglasses. I leared that sunglesses were unnecessary/unsafe in the shade so I tucket them in my shirt. When I fell, they must have flown off without me realizing it and now my favorite, and only, running glasses were gone forever. Ugh. Is this race over yet?

I ran into the finish line, saw Chicken Face and started shouting, “I got completely lost for two miles!” 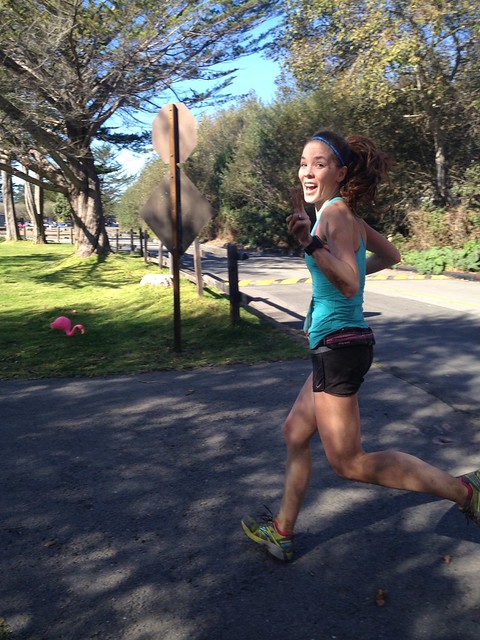 I crossed the finish line not knowing, or caring at all, what my time was. I was just happy to be done. 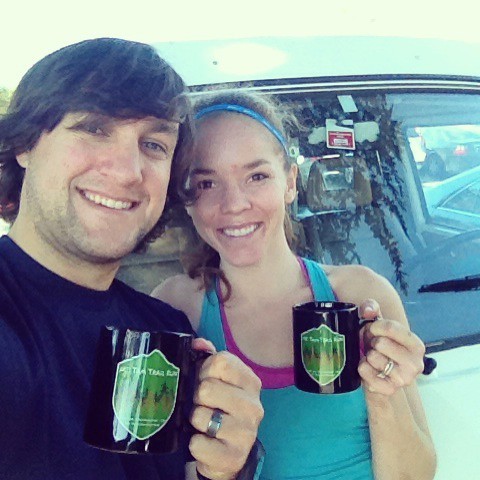 If I had to recap the course itself, I’d tell you that the beauty will not disappoint, nor will the challenge. Chicken Face said he was humbled by his 10K and the views were worth all of the climbing. Plus, I was so proud of Chicken Face for going along with another crazy idea and tackling his first trail race. 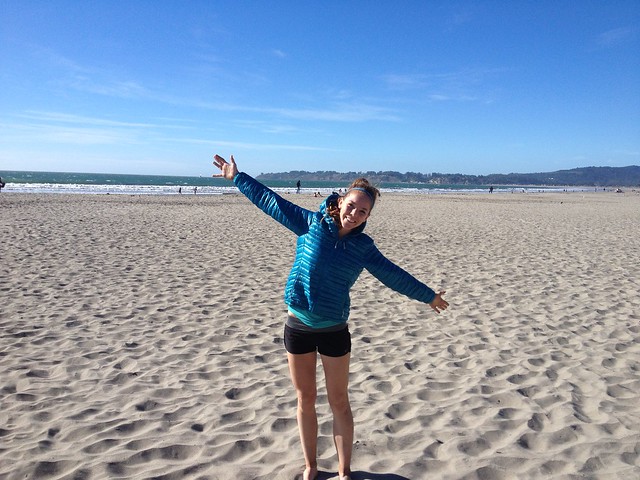 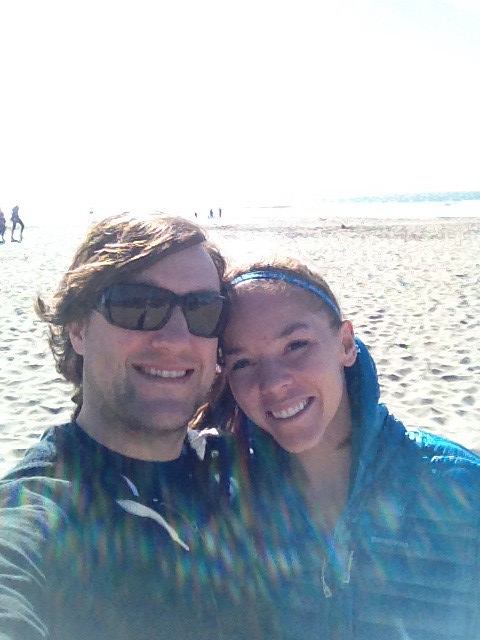 Post-race, Chicken Face and I went to the beach where we took a nap together on the sand. And that, my friends, made it all worth it.

Like Loading...
half marathon mt. tam race
by PageWilliams
17 Comments
previous: There Will Be Bears
next: Injured, Sick & How To Treat A Sprained Ankle